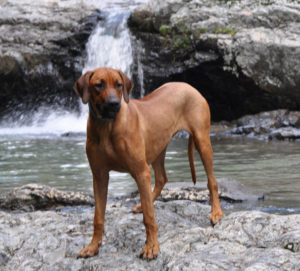 Kera was born in Russia and we imported her to the United States. We liked the size and dark red color of her sire and wanted to bring it into our bloodline. Her sire Rayridge Jared Boleyd “Boy” is a very accomplished show dog and her mother “Lona” is a Russian Champion as well. Kera turned out to be a great addition to the family. She has a very loving personality and never meets a stranger. When meeting new people for the first time she treats them as if they are her master returning home from work and she has missed them all day. Kera loves the kids, the water, and riding in the car. If her personality passes on to her pups they should make great family pets as well as show prospects.

A couple pictures of Kera on the long drive to Louisiana from New York.